Spotting wild animals is hard. Many creatures begin their day when the sun sets—conveniently when it’s toughest for us to see them. It’s almost like they do it on purpose.

To study the “night owls” of the animal world, researchers at the San Diego Natural History Museum have a few fancy tools in their toolbox, but some of their methods are simple, cheap, and just plain fun. Daylight savings time is around the corner, and with it come more opportunities to see local wildlife. Make use of the earlier evenings ahead with some after-hours investigation in your yard or local parks.

Here are three things you can do to catch a glimpse of the critters living under cover of darkness. 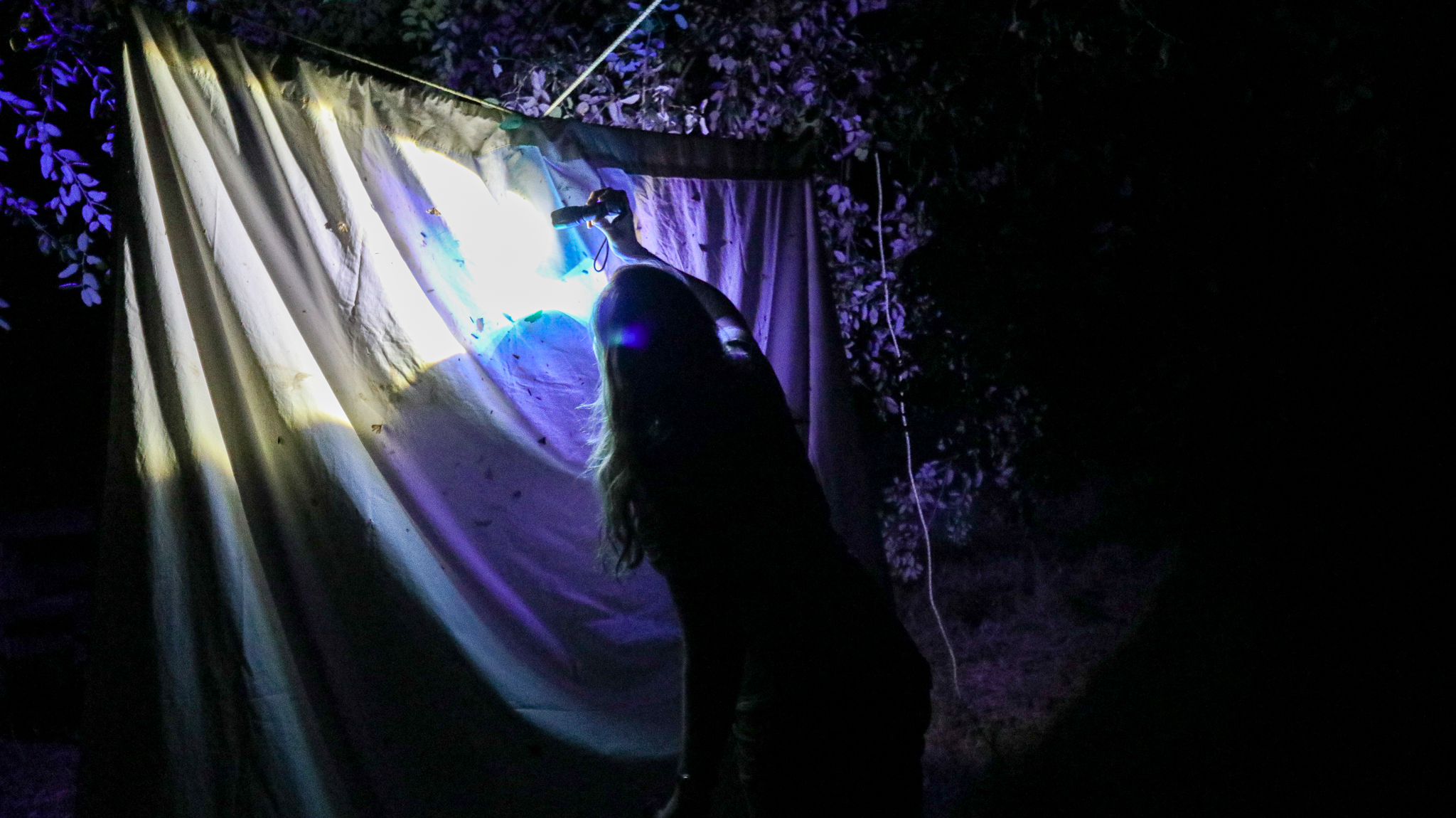 Ever notice how bugs are attracted to porch lights? Our entomologists sure have. When our researchers need to know which insects live in an area, they’ll string a white bedsheet outside, usually between two trees or draped over a fence. Then they fire up a UV blacklight (regular white lightbulbs work too), aim it at the sheet, and wait. Within minutes, insects attracted to the illuminated sheet begin to arrive. Within an hour or two, it’s astonishing how many species of gorgeous moths, beetles, and other insects make their way to the beacon.

“Most insects see a different range of light than we do, so blacklights are really effective at attracting them,” says Entomology Collection Manager Pam Horsley. “The cool thing about blacklighting for bugs is that you always get something. Bugs always show up, and the assemblage is always different depending on where you are.”

Pro-tips from Pam: Dark, moonless nights are best for this activity. Lay a second, light-colored sheet on the ground below your set up to see the insects landing on the ground. Otherwise, it’s easy to accidentally step on them. Oh, and try to keep your mouth closed. When you’re done marveling, simply turn off the light and leave the sheet out until morning. Everything should be gone by sun-up. 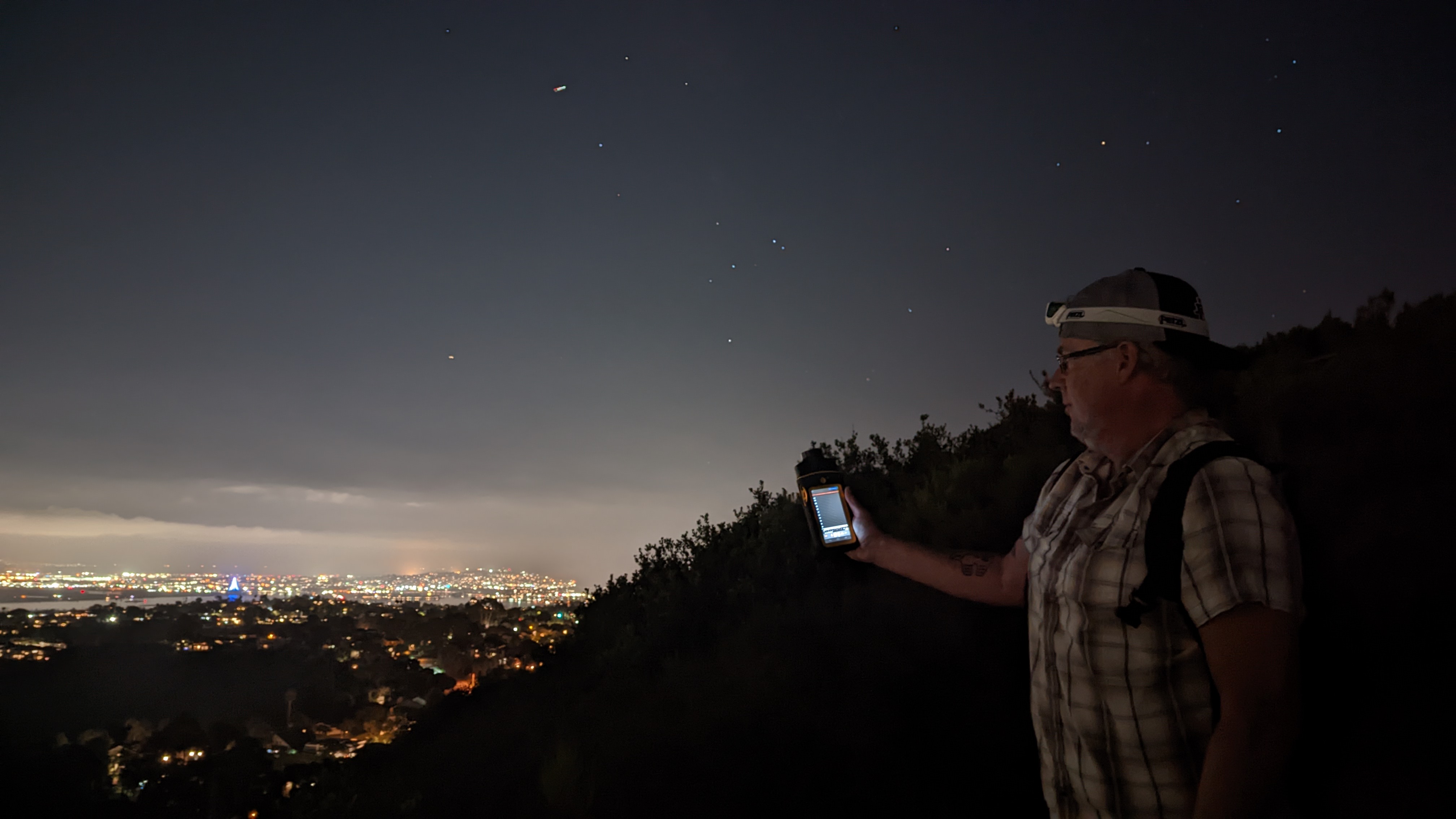 We barely notice them, but bats are all around us. San Diego County has 22 species of bats, and several of them can be observed if you’re in the right place at the right time. According to Wildlife Biologist Drew Stokes, the official “Batman” for The Nat, bats are especially active in the late spring, summer, and early fall because that’s when insects (their prey) are most abundant. He says the best time to spot them is 15-20 minutes after the sun dips below the horizon.

Drew notes that most bat calls are inaudible, but women and youngsters can often hear the higher frequency squeaks and clicks that certain bats emit, making them excellent bat-watching buddies.

All of our region’s bats feed on insects or nectar, so where there are bugs, there are bats. Water sources like Lake Murray or Old Mission Dam in Mission Trails Regional Park are excellent places to go, as they also have open skies to see the bats foraging overhead. Drew also sees lots of bats where natural habitats interface with landscaped (irrigated) areas, such as the edges of canyons, parks, or golf courses. Most public spaces close their parking lots at sunset, so be sure to park outside any gates if you plan to stay for a night hike. 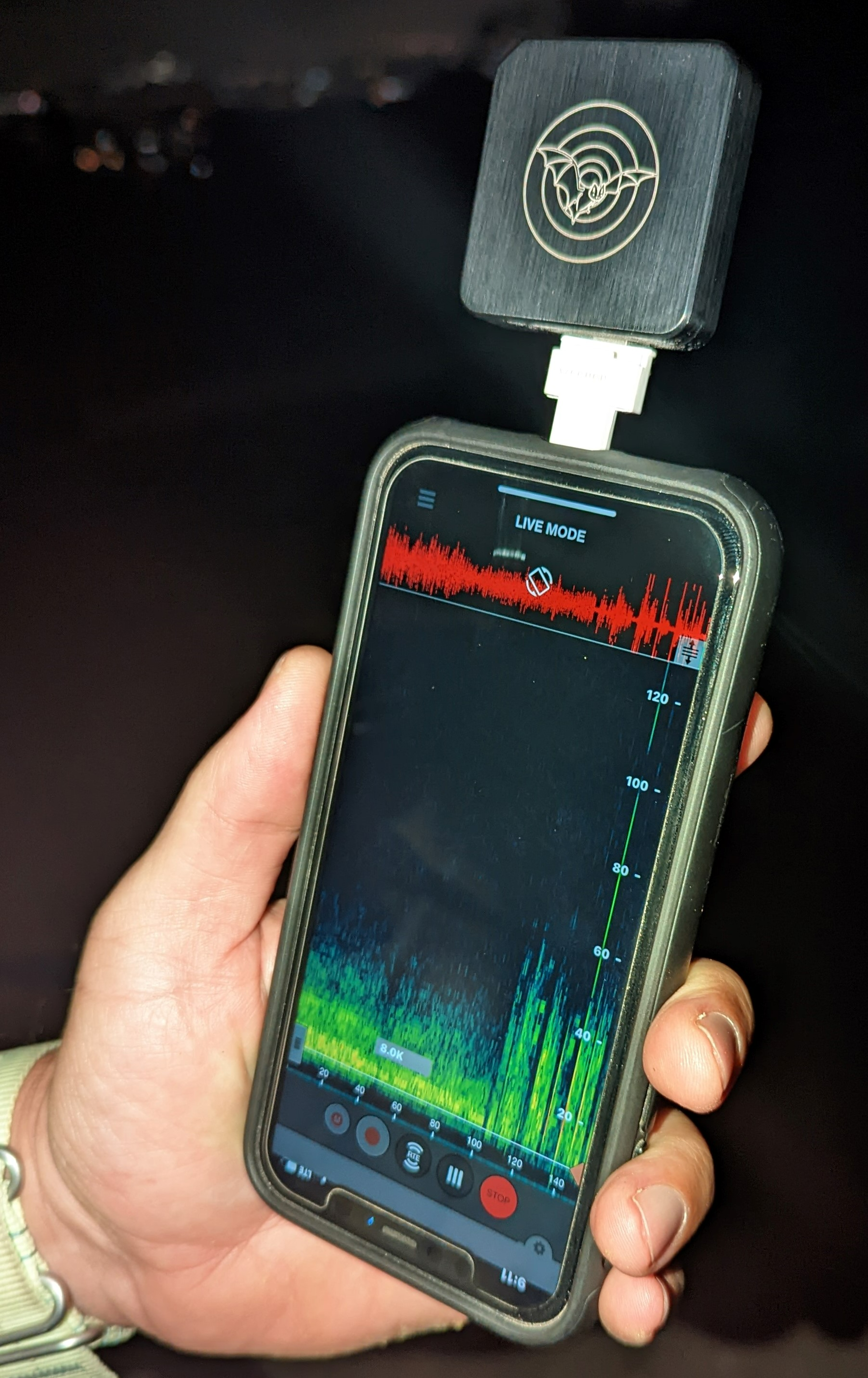 Kick it up a notch: Get yourself a bat detector. Drew uses several kinds of bat detectors for his fieldwork almost every day.

“Watching bats do their thing is probably my favorite part of my job,” he says. “Watching their echolocation calls on a bat detector and seeing them fly around is just so rewarding, especially once you know how to distinguish between the different species.”

It's not dirt-cheap, but Drew’s top pick is the Echo Meter Touch by Wildlife Acoustics, which plugs in to a phone or tablet, picks up the bats’ ultrasonic squeaks, and re-emits them as sounds that human ears can hear, while visualizing the echolocations on-screen. The associated app can also suggest which species you might be hearing.

“Bat detectors are extremely useful because you can observe bats without handling them, or even seeing or hearing them,” says Drew. Talk about superpowers. 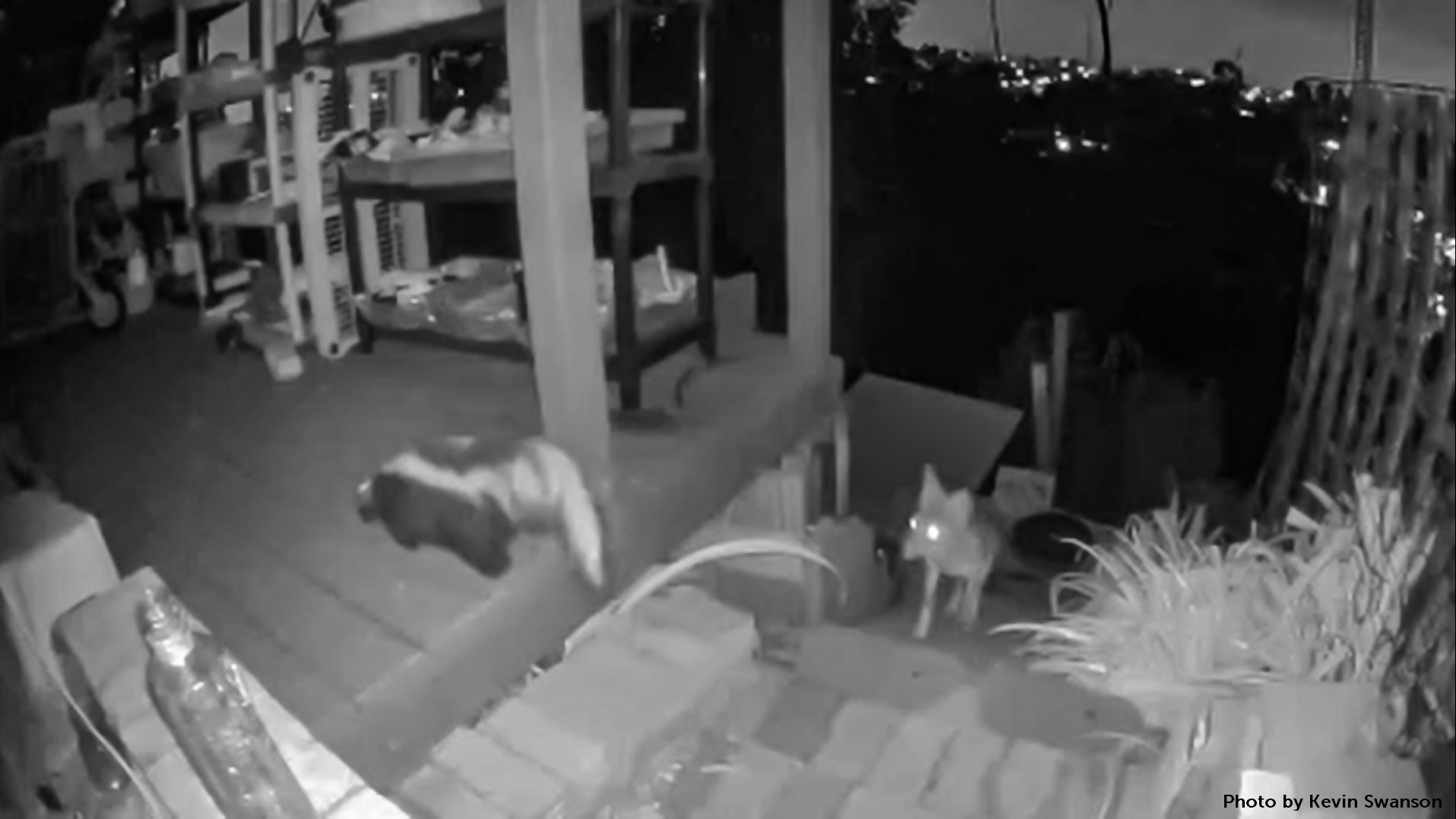 Camera traps, also known as trail cams, are motion-sensing cameras that snap photos of animals going about their business. Researchers at The Nat use them all the time to see who is visiting a location, what they’re doing there, or how they’re interacting with other animals and plants.

“Mammals are very secretive,” says Mammalogist Scott Tremor. “There’s a very low chance of seeing them in the wild, but camera traps are a terrific and convenient way to see their natural behaviors when we aren’t around.”

Depending on your budget, there's a variety of camera trap options online or at sporting goods stores. Security cameras work too, as long as they respond to motion in low light. Take note of where wildlife might pass through your yard (narrow corridors, signs of digging, scat, or prints), then use a bungee cord or zip-ties to strap the camera to a tree or fence post. If you don’t have a yard, you can place one on a balcony near a bird feeder, or you can set one up inside your house to see what your pets are up to when everyone’s out or asleep. Permits are required to set camera traps in public areas, so it’s easiest to stick to your own property for this one.

“Trail cameras make a wonderful gift,” says Scott. “Once people start using them, their eyes are totally opened and they have so much fun with it.”

Scott's secret to success: Make sure there aren’t any plants in your camera’s field of view that might move with the wind and trigger the motion sensor. Otherwise, your camera will snap a thousand photos of the same plant. 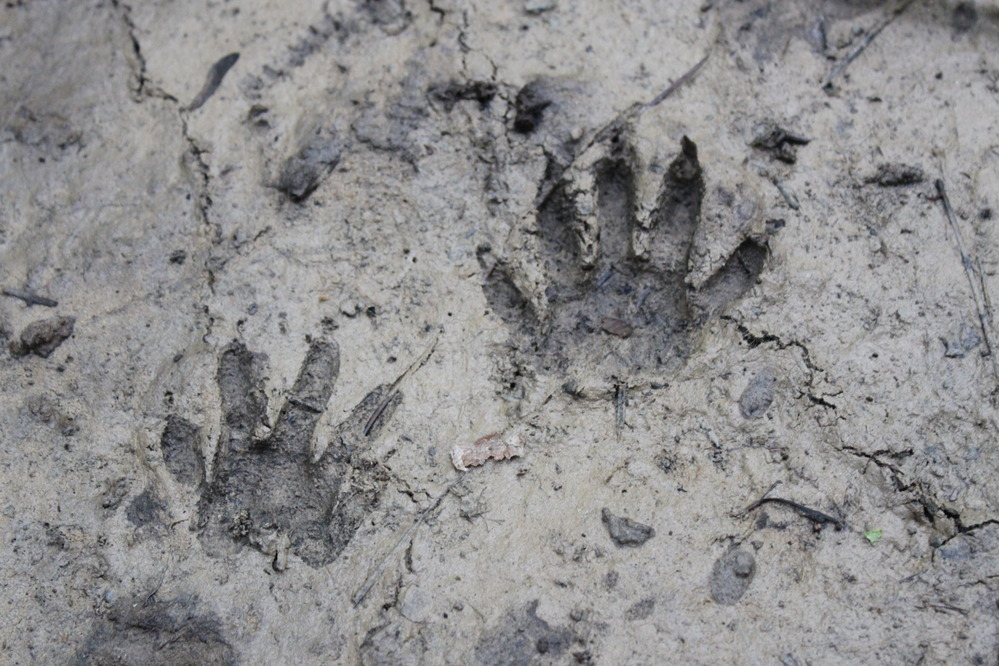 Set up an animal track station to see which mammals are slinking through your yard at night. Find a smooth, dirt surface (or lay down a wide board of wood or other material) where you think animals might be walking. Sift a thin, consistent layer of chalk powder or plaster of paris onto the surface (do not use flour, as it can attract pests). When animals step on the powder, their paws will leave tracks you can then identify using iNaturalist, the internet, or a field guide. Be patient with this one, it may take a few days for the animals to get used to your track station set up.

Watching wild animals do their thing is a rewarding and exhilarating experience. Please remember that wildlife is best viewed with eyes (never hands), and that feeding or baiting wild animals can quickly result in disease transmission or injury to you or the animal, as well as unhealthy animal dependence on humans. Besides, it’s more fun to see their natural behaviors!

If you capture any camera trap photos, consider sharing them with us here—your photos might get featured on a rotating screen in our exhibition Caught on Camera: Wildlife When No One’s Watching.

This is Fall in San Diego

Three Ways to Help Monarchs this Fall and Winter

Subscribe to our blog. Receive an email once a week that recaps the latest blog posts about our research, exhibitions, cool science news, and more