Capybaras used to call San Diego home—and no, they weren’t in a zoo.

A new study published this week in Vertebrate Anatomy Morphology Palaeontology describes a novel species of extinct capybara that once roamed the San Luis Rey River Valley in Oceanside, California. The study is based on a nearly complete, fossilized skull from The Nat’s paleontology collection, which was recovered from a shopping center construction site by The Nat's PaleoServices team.

"To find capybara bones in Oceanside is remarkable," says Dr. Tom Deméré, paleontology curator and coauthor on the study. "Their presence here is a puzzle, it reminds us that we have a lot to learn about our region's ancient biodiversity."

Capybaras are the largest living rodent on Earth. They are semi-aquatic, hanging out in the lowlands near waterways where they wallow in mud, munch on plants, and chirp and squeak at each other. Their range was much larger in the past, but today it’s restricted almost entirely to South America’s rainforests.

There are two main lineages of capybaras that have existed in the Western Hemisphere throughout time. One is completely extinct, while the other, called Hydrochoerus (Latin for "water pig"), lives on in South America today. Fossils from the extinct lineage have been found in South Carolina, Florida, and Sonora Mexico, but The Nat's specimen is the first and only Hydrochoerus fossil found in all of North America. It also represents the northwesternmost fossil evidence for the entire capybara family.

"As usual, this finding leads to more questions like 'why haven't we found more capybara bones here?' and 'how did they disperse over the mountains of the Peninsular Ranges?'" says Deméré.

The mountains he’s referring to include the ranges just east of San Diego, which form a backbone of continuous high-elevation land stretching from I-10 down into Baja California Sur. The current height of the Peninsular Ranges predates this newly described capybara by hundreds of thousands of years. How these South American, lowland-dwelling animals managed to disperse from Mexico, cross over a mountain range, and end up in coastal San Diego County remains a mystery. What we do know is that this capybara was slightly larger than the ones paddling around in the Amazon's wetlands today.

"The bones in the skull of this new fossil species are more robust, especially in the zygomatic processes, or cheekbones," says Deméré.

That a new species was described from the specimen is remarkable in itself, as over time the skull was crushed to pieces by compaction of the surrounding rock during the 80 to 130 thousand years since the animal died.

Deméré’s colleagues—hailing from The Mammoth Site, the University of Arizona, and New Mexico’s Museum of Natural History and Science—comically named this new capybara Hydrochoerus hersperotiganites, or the western pancake capybara, in reference to the fossil's flattened condition. The crushed bones were still well preserved, however, along with the teeth, making the identification process a whole lot easier.

"Without the well-preserved teeth, we probably wouldn't have been able to identify it as a member of the Hydrochoerus lineage," says Deméré. "But features on the cheekbones and parts of the cranium led us to our determination that it was a new species." 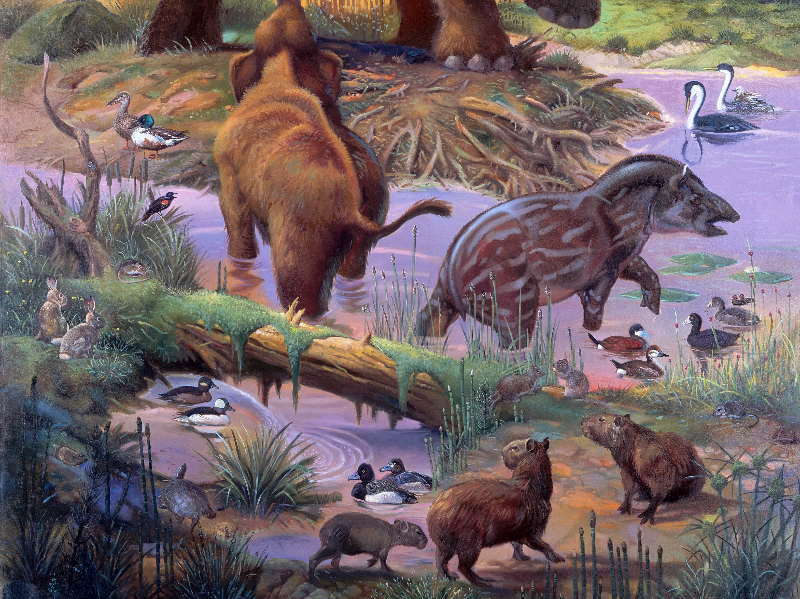 San Diego County, in its scrubby, often crispy glory of today, is hardly a perfect place for large semi-aquatic rodents to roam. But 100,000 years ago during the Pleistocene, the region was wetter and mammals big and small ruled the land. Mastodons, ground sloths, camels, bison, and pronghorn grazed the foothills, while tapirs and capybaras plodded through wetlands. Some familiar locals existed back then too, including jays, road runners, foxes, and ducks.

Today, San Diego County boasts the highest species diversity of any county in the contiguous United States. This richness of life extends deep into the past, and the museum’s PaleoServices team is constantly unearthing more clues to define and explain it.

“We still have a lot to learn,” Deméré says, “which I think is very exciting for the next generation of paleontologists.”

Speaking of the next generation—three more discoveries of ancient San Diegan carnivores will be published this spring by our James R Colclough Paleontology Postdoctoral Fellow, Ashley Poust. Stay tuned.

Subscribe to our blog. Receive an email once a week that recaps the latest blog posts about our research, exhibitions, cool science news, and more